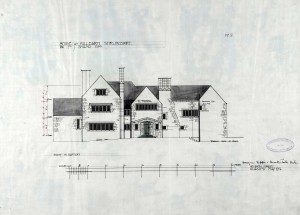 Mackintosh designed Auchinibert House after he was made a partner at the Glasgow Architect practice of Honeyman, and Keppie in 1904. It was built for F.J. Shand, the manager of Nobel’s Explosives Company Ltd in Glasgow. The large, Tudor style mansion is situated just outside Killearn village, Stirlingshire. Mackintosh’s distinctive handwriting is visible on some of the plans and there is surviving correspondence to Shand from Mackintosh that confirms that he was the sole designer of the house. 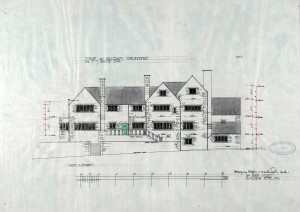 Shand initially consulted Mackintosh about the design of his proposed new house in a letter, dated 13th September 1905, now held at the Hunterian Museum in Glasgow. Mackintosh sent a response, dated the 15th September, with his proposal. Plans were drawn-up in the April and May of the following year. The plans were approved by the Western District Committee of the County Council of Stirlingshire on June 20th 1906 and it is these plans that are held at the Archives. Work began on the project in September 1906 and the house was completed by the end of 1908.

The house is perhaps not a typical example of Mackintosh’s work. It resembles an English Tudor manor house and it is likely that the design was very much influenced by the brief given to Mackintosh by the owner. There are some touches that are characteristic of Mackintosh’s work including the moulding over the front door and the wooden balustrade on the landing. It appears that Mackintosh had some sort of disagreement with Shand and left the project just before completion, sometime in 1908. The family had alterations made to the building as soon as two years after its completion by another Glasgow Architect, David Hislop and there is a set of plans in existence showing annotations made to the original Mackintosh designs by Hislop. The house remains standing and is a private residence.

Rennie Mackintosh designed other buildings in the area including Bridge of Allan Parish Church Hall in 1894 and buildings at ‘Dineddwg’ house at Mugdock in 1904 – 05.

The collections of plans held at the Archives from the various local councils in the area provide a wonderful record of the built heritage of Central Scotland and a great resource for both private and academic researchers.

For more images view our gallery.