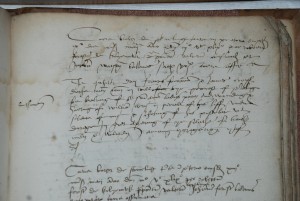 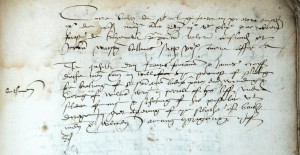 This entry from the Burgh Court book of Stirling gives the first written evidence of the possession of a pistol in Scotland. The Burgh Court had the power to try people for various offences of a minor nature and was overseen by the Provost and Bailies or Magistrates of the Town. The register gives the introductory statement relating to the sitting of the court, the date and the names of the officials in Latin, the rest of the entry is in Scots. Scotland was one of the first countries in Europe to use its own language in legal documents.

In this entry, Provost Robert Forester and two Bailies, Walter Cousland and James Watson are trying the case of two Dutchmen, Francis Fontaine and James Hoiff who are accused of discharging a pistol, breaking ‘our sovereign lady’s peace’ a formal charge, the sovereign at this time being Mary Queen of Scots, and of wounding William Wright ‘in peril of his life under silence of night’. The word used for the gun is ‘pistolate’, a Scots form of the French word ‘pistolet’, used from the mid 16th century onwards to describe a hand gun. The origin is possibly from the Czech word ‘pistala’ meaning ‘flute’ and referring to the shape of the weapon.
This entry is important as it shows the presence of a hand gun in Stirling at a time when these weapons were not at all common and probably not yet made in Scotland. The discharge of such a weapon by a civilian is likely to have caused great consternation and alarm in the Town and been the subject of much gossip, Unfortunately, there are no surviving court papers from this case to give details as to the background of the story.