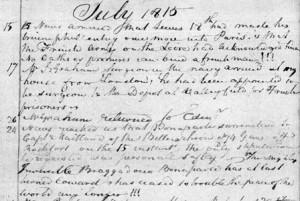 Transcript
July 1815
15 News arrived that Lewis 18th has made his triumphal entry once more into Paris, and that the French Army on the Loire had acknowledged him. No Oaths or promises can bind a french man !!!

17 Mr I Graham Surgeon in the navy arrived at my house from London, he had been appointed to be surgeon to the Depot at Valleyfield. for French prisoners.

24 News reached us that Bonaparte surrendered to Captain Maitland of the Bellerephron of 74 Guns off Rochfort on the 15 instant. The only stipulation he requested was personall saftey (sic). The Mighty Invincible Braggadour Bonaparte has at last turned Coward and has ceased to trouble the peace of the world any longer !!!
New Potatoes sold for one shilling the peck of 28 lib.
The Supply of water from the Springs which is brought to the town in pipes, has been very scanty this Summer.
The weather has been favorable the whole of this month, there is an excellent appearance of an abundant Crop.
The Stirling Militia have been embodied to the number of 400 or thereby.
The Markets continue to be moderate.

1 Napoleon Buonaparte continues on board the Bellerephon but has been removed to the Sound of Plymouth and is strictly Guarded No boats are allowed to board the Ship.