In early 1746, Charles Stuart, the ‘Bonnie Prince’ or Young Pretender, was on his way north after his decision to abandon his attempt to take the British throne. Charles was keen to enter Stirling in order to feed and rest his forces there and to take control of any armaments that the Town had in its stores. He had his clerk write a letter to the Provost and Magistrates of Stirling, asking them for admittance. The letter included a clear threat to the Town and its inhabitants: –

“Assuring you hereby that if you refuse or delay to receive us, or to deliver up the Arms and Military Stores, as aforesaid, and thereby oblige us to use that force which Providence has put in our hands, after our discharging of one Canon against the said Town, no articles of Capitulation or protestation shall be given to any of the Inhabitants for their persons goods and effects… if any person therein now in Arms shall be apprehended without the Walls of the Town they shall be carried to immediate execution…”

The Provost, Bailies and Council met together with various prominent townspeople to discuss what should be done and it was decided that it was in the interests of the inhabitants of Stirling to let the army in to the Town in order to avoid bloodshed and the destruction of property.

Charles issued requests for assistance in a similar vein to that sent to Stirling Town Council to his supporters in the area. Two examples of these survive in the papers of the Murray family of Polmaise.


Charles made his base in the area of St Ninians and stored gunpowder and other arms in the ancient church there. On the 1st February a huge explosion entirely demolished the church. What caused the incident is not at all clear: supporters of the young Prince declared it an accident, those opposing the rebels claimed that it had been done on purpose. The minute of the Kirk Session of 10th February reports ‘the Beddal further represented that the Highland men had carried off one of the little Mortcloths & the Pulpit-cloth…’ It took some time to rebuild the church and in the interim, St Ninians parishioners worshipped in the vacant West Kirk at the Church of the Holy Rude in Stirling.

After the Battle of Culloden and the end of the uprising, the Town Council found that they were in the awkward position of having to explain to the British government in London why they had capitulated to a rebel and traitor. In the Council minutes for 10th February 1746 it is reported that: –

“there was produced in Council the St James’s Evening post of date the 30th January Wherein there is an Account insert (and which was read) highly reflecting on the Magistrates and Town Council and stuft with gross falsehoods and lyes concerning the Surrender of this Town, at which the Council were much offended, and therefore doe aggree & appoint a true and genuine Account of the reasons & manner of the Surrendry to be drawn up…to be at length ingrost in the Council’s books, that the behaviour and conduct of the Town may the better appear…” 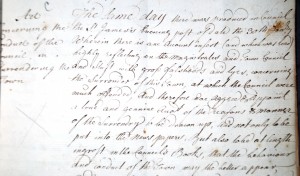 There then follows a ten page account of the reasons behind the actions of the Council, justifying them on the grounds that the town was not equipped to see out a long siege and that the threat to the citizens was too great to be considered reasonable: “By far the greatest part of those present and who are known to be as zealously affected to his Majesty King George as any in Brittain, Gave it as their judgement, That to continue the Defence of the Place would be a dangerous and fruitless attempt… The vast Disparity between the Rebells their entering on terms and their entering by assault, the consequence of which last must have been that our Streets would be Strowed with the Corpse of the inhabitants and others and the whole effects in the Town become their plunder…”

On the 7th July 1746, the Provost and Council resolved to send a loyal address to King George II. This address was duly published in the London Gazette of 26th July 1746. A copy of this newspaper is bound in to the Council minute book at this date. 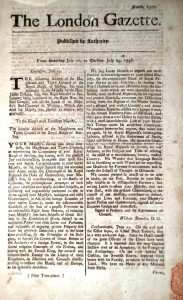