The graceful Arts and Crafts style building of the Strathblane Village Club is situated on the Glasgow Road in Blanefield. The building of this community hall was funded by Sir Alfred Yarrow in 1911 and the building left in trust by the Yarrow family to the village of Blanefield and Strathblane. The plans are dated 9th December 1910 and are ink and watercolour wash on linen backed paper. There is also a separate plan showing the drainage of the building. 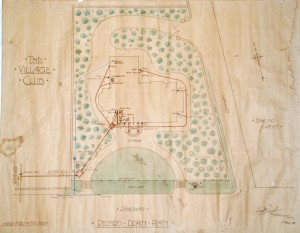 Sir Alfred Fernandez Yarrow was born in East London in 1842. He founded a shipbuilding company, Yarrow Shipbuilders at Poplar in the Isle of Dogs. The yard was moved to Scotstoun on the River Clyde between 1906 and 1908 and the London yard closed. Yarrow’s became famous all over the world for Sir Alfred’s innovation in building faster vessels for naval use and was a major employer in the Glasgow area. Sir Alfred also became well known for his philanthropic activities; he gave money to found various schools, hospitals and children’s homes in the London area as well as the donation to build the Village Club. 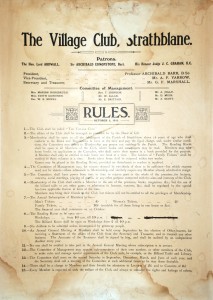 Activities in the Club building have varied over the years with many dances and social events being held there. The Strathblane Village Club continues to provide a local centre for all kinds of activities in the Strathblane area from exercise classes to live music. The Club also has a regular series of speakers each year and the Council Archivist has been very kindly received there to talk about local history on more than one occasion. Strathblane Bowling Club is situated just next door to the Village Club and the records are also held at the Council Archives.